Golf has been played at The Machrie since 1891. First conceived by Willie Campbell, the course was famous, some might say infamous, for the number of ‘blind’ shots incorporated into the design. More than perhaps any other course in the world, The Machrie needed knowing. All of which contributed hugely to the charm and challenge of the original 6,254-yard lay-out. Creativity, shot-making, imagination and feel for distance were the golfer’s biggest assets. Sheer power had its occasional place, but golf at The Machrie was more about subtlety than strength. In that respect, nothing has changed. At The ‘new’ Machrie, course architect DJ Russell has maintained the need for artistry amidst the inherent randomness that is such a diverting feature of all seaside golf. The blind shots remain too. But with a twist. On almost every hole, the ideally placed tee-shot will now allow the golfer an unimpeded view to the green and the flag. But anything less than perfection will see that advantage removed.

Outwardly at least, a generously wide fairway welcomes the opening drive on this left-to-right dogleg par four. Left off the tee is fine, but the right-hand side of the fairway offers the shortest and most favourable approach into the sunken green. Especially downwind, aim to land short and let the contours feed your ball onto the undulating putting surface. Links golf at its best. 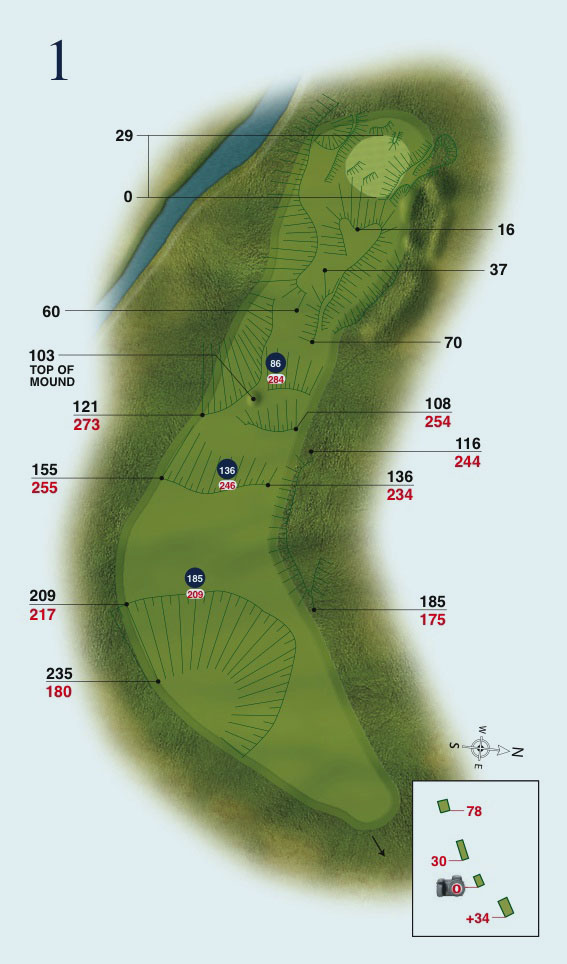 On this classic ‘risk and reward’ par-5, the ideal drive must challenge the burn on the left side of the fairway. From there, the stronger player may have an opportunity to reach the green in two. In contrast, play safely to the right off the tee and the hole becomes a genuine “three-shotter”, the challenging lay-up is no bargain. The long green has three subtle tiers, the left-side falling away towards the water. 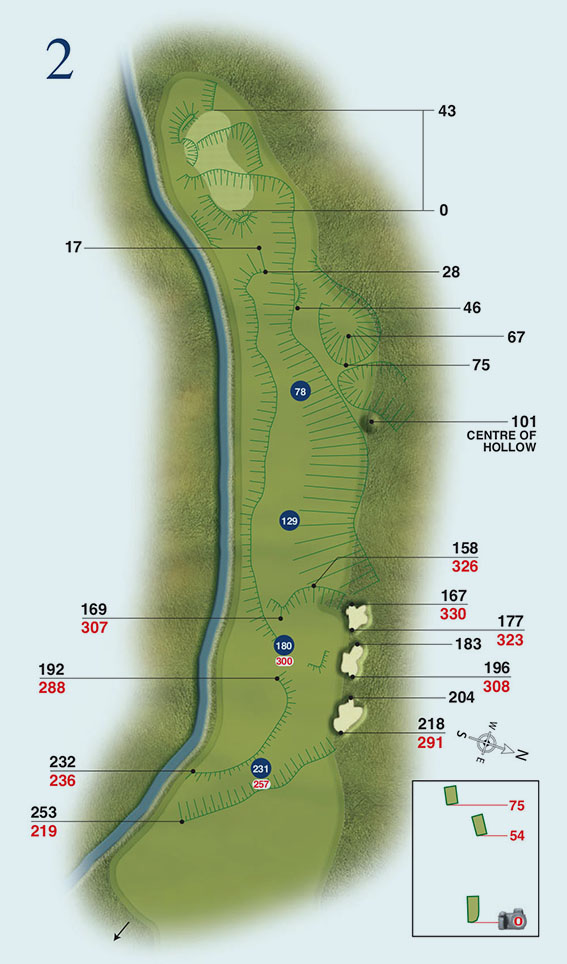 The first par-3 plays slightly uphill to a green protected at the front by two deep pot bunkers and a swale to the left and rear. The putting surface slopes mainly from left-to-right, a small tier to the back-left representing the toughest pin position. In any conditions, it takes a good, aggressive swing, the correct club selection and no little courage to find that ever-elusive spot and bequeath a birdie putt. 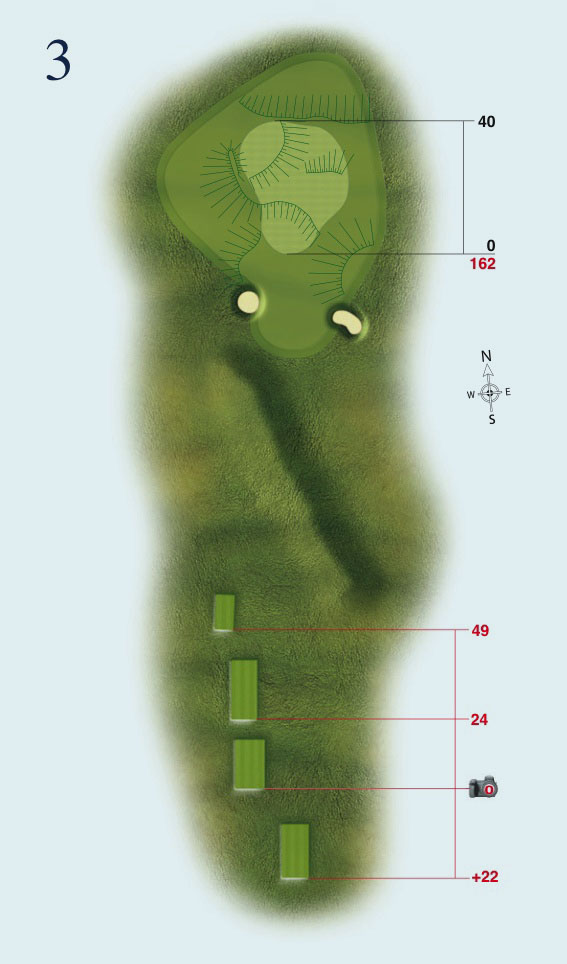 Another generous fairway, but don’t be fooled. The ideal line is down the right-hand side. Anything left will likely leave a blind approach to the boomerang-shaped green that sits well above the level of the fairway. A lot depends on the pin-position though. If in doubt, use the slope to the left-side of the green to feed the ball back towards the middle of the green. 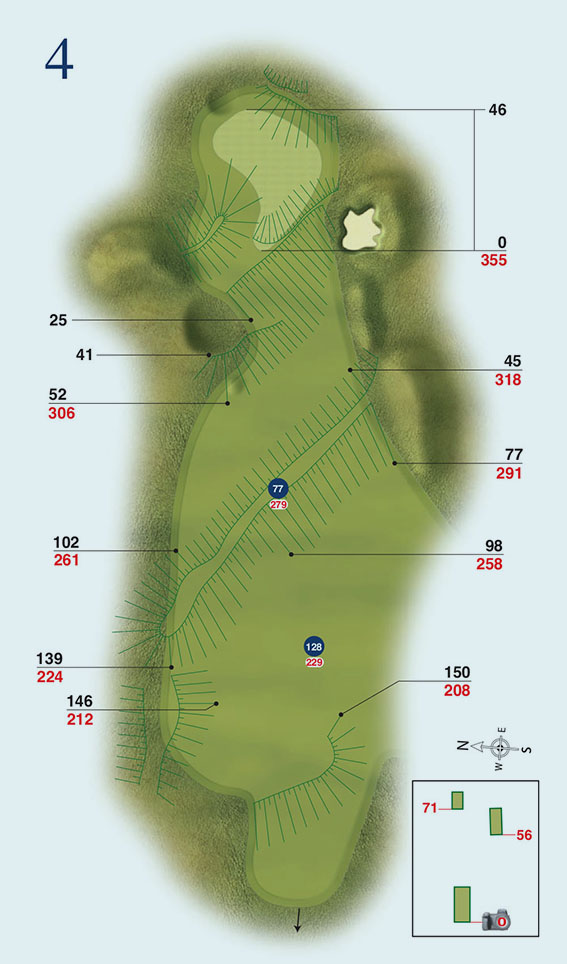 “Perfection” by name and one of the tougher driving holes on The Machrie Links. A good tee-shot must fly directly over the marker pole; even slightly right means the approach will be blind. From the ideal spot on the three-tiered fairway, the second-shot is in contrast welcoming, downhill to a green nestled under the maiden dune. Watch out too, for the ridge running through the middle of the large green. Putting from the “wrong” side is never easy.

On this straight-away par-4, the tee-shot must miss the deep pot bunkers that sit in the middle of the fairway. The ideal line is to the left, opening up the green, which is sunk beneath the dunes. A drive to the right will likely leave a blind approach. And don’t be misled by the “look” of the green and the subtle swales. Not everything will run down onto the putting surface. The lower-tier towards the rear makes good distance control essential. 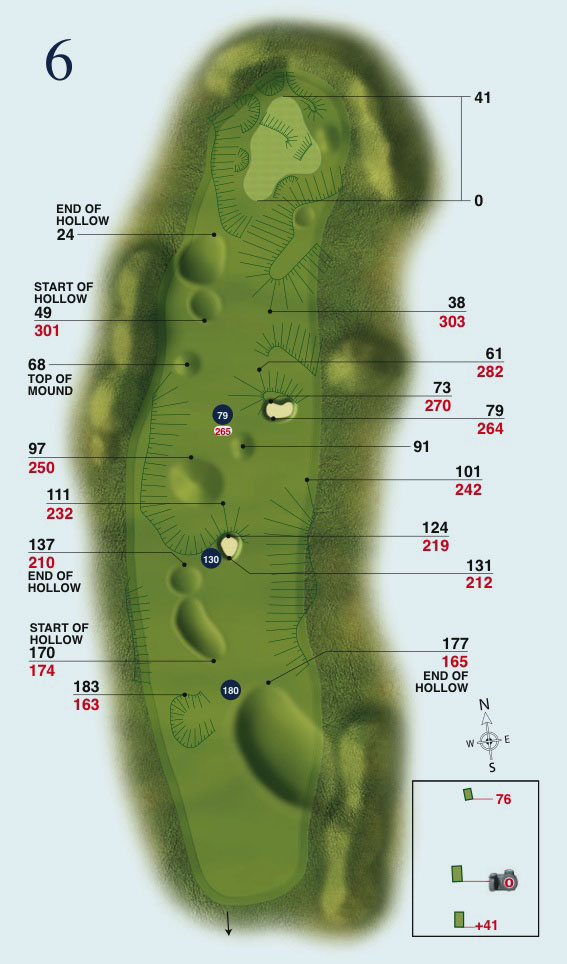 This short par-4 may be drivable in favourable conditions, but accuracy is a must. Beware of the run-off to the left of the green. From there, the resulting chip is devilishly difficult, the green running sharply away from you. Alternatively, an iron off the tee to the angled fairway will leave a blind approach over the dune to a green that slopes from left-to-right. Avoid at all-costs the deep (and hidden) pot bunker at the back of the green. 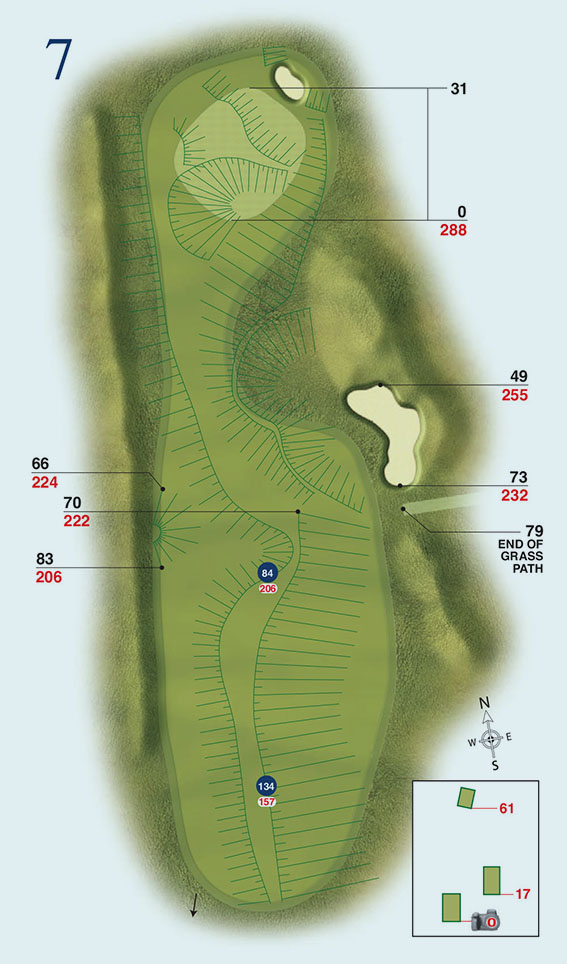 Drive through the valley to a generous fairway, the ideal line dictated by the pin position. Any drive down the right will feed off the slope and back into play. The approach over the huge swale that protects the front of the green means? don’t be short! More generously, the three-tiered green plays “wider” than it looks because of the surrounding slopes. But putting is tricky, the surface dominated by the distinctive lower-tier at the front and a subtle tier to the rear. 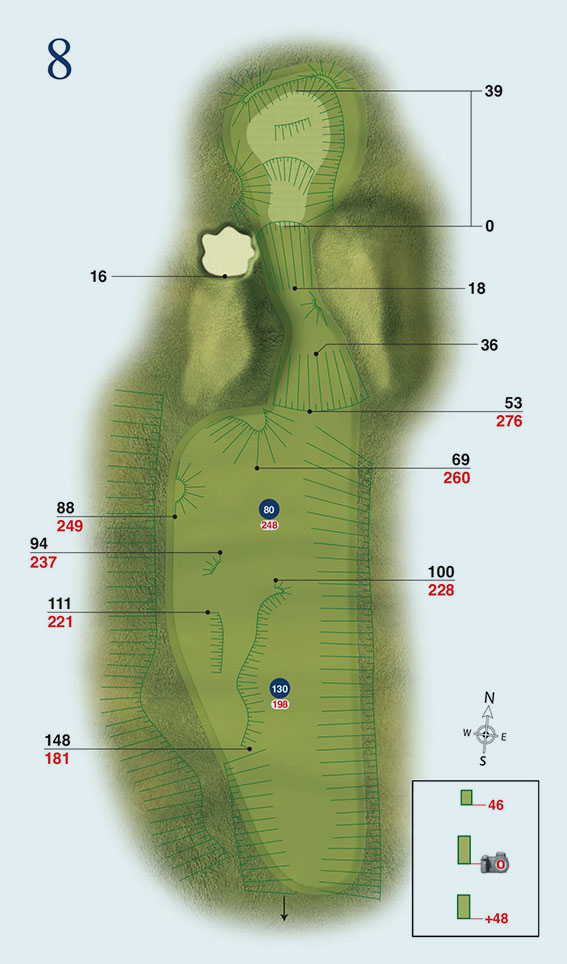 Good distance control is essential on this deceptively tricky, downhill par-3. Controlling both trajectory and accuracy is a real challenge, especially in the wind. Miss the large green and there is little chance of recovery from the surrounding dunes. And take care. Don’t be distracted by the stunning views from the tee. The putting surface may appear flat at first glance, but there is subtle movement on nearly every putt. 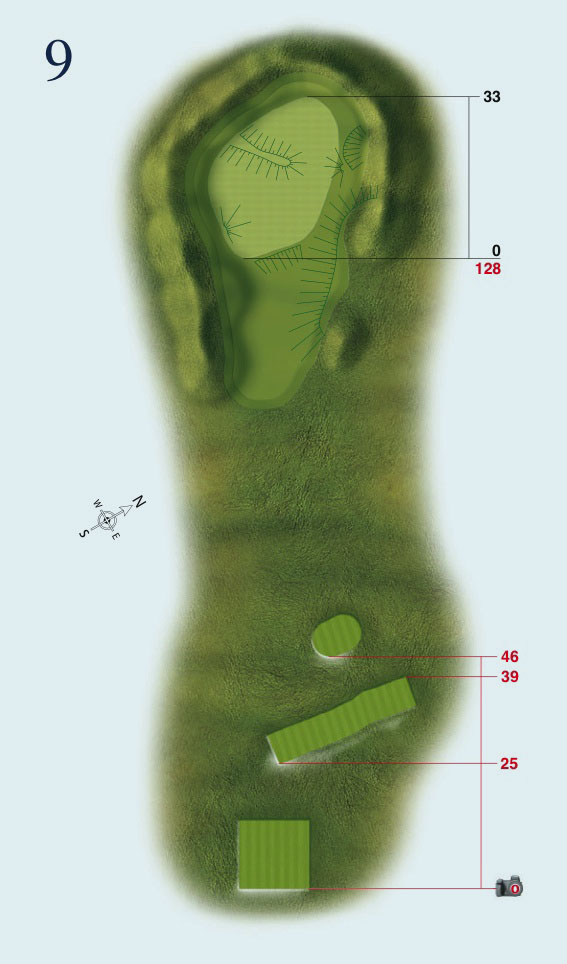 On this long, tough par-4 the ideal drive must challenge the Machrie Burn on the left-hand side. From there, the reward is two-fold, a shorter approach and a better view of the green. Drive to the right and a blind second-shot awaits. The green sits below the level of the fairway and is relatively small in comparison to others at The Machrie. So, with little room for error, although short is better than long, accuracy is a must. 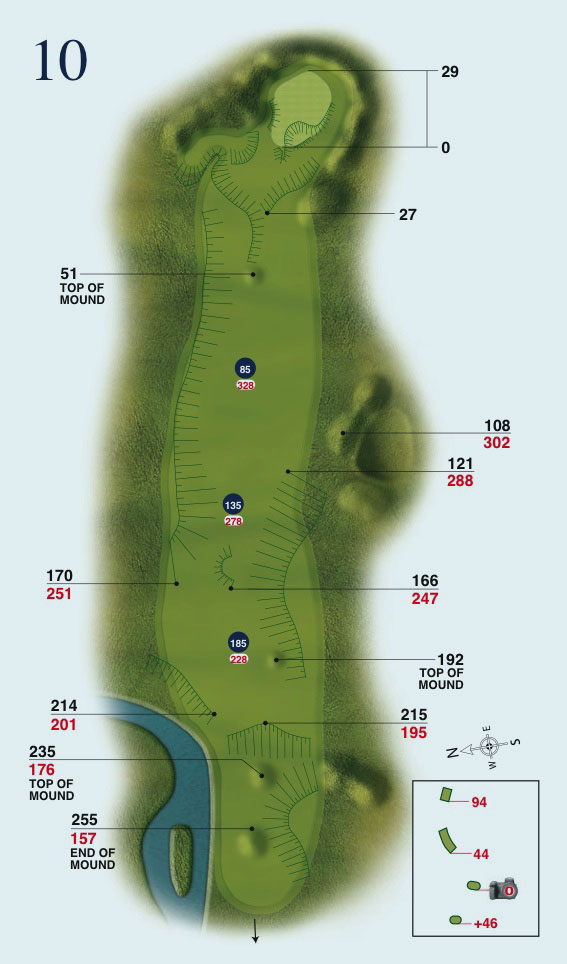 Another drivable par-4 through a valley with heather on both sides. With the obvious risk comes reward, the decision from the tee largely dictated by the pin position. If the flag is near the front of the green any risk is minimised. But if the hole is cut on the distinctive tier towards the rear of the long and narrow putting surface, the sensible play is to lay-up and leave a short-iron approach. Whatever, recovery is always difficult once out of position. 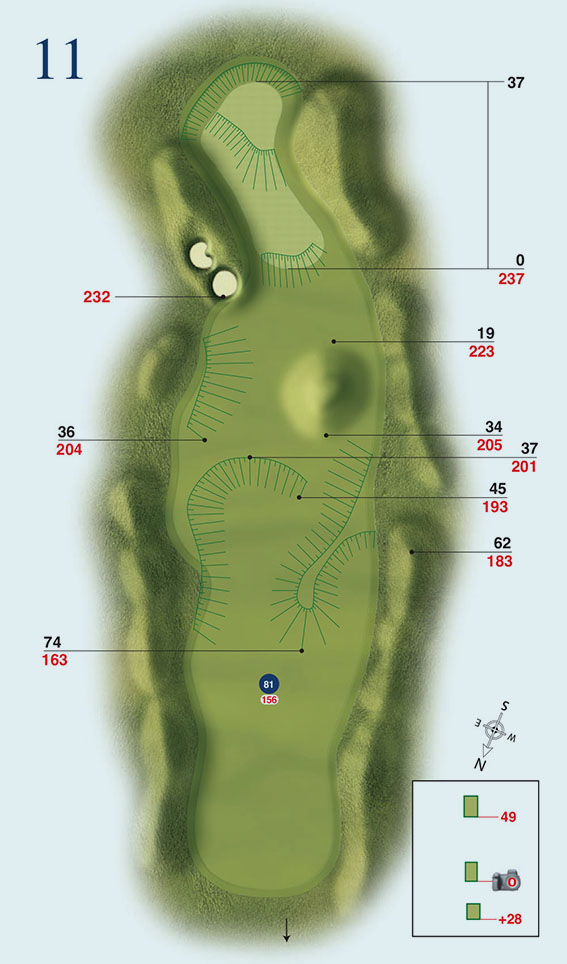 This dogleg-left par-5 offers a generously wide landing-area off the tee, but down the middle is not ideal. Instead, the preferred route is left of the heather mounds splitting the fairway. This shortens the hole and leaves a clear view to the green. Pay careful attention to the pin-position if laying-up with your approach. The green slopes from back-to-front, the ridge on the left-side likely to feed the ball away from the cup if the shot comes up short 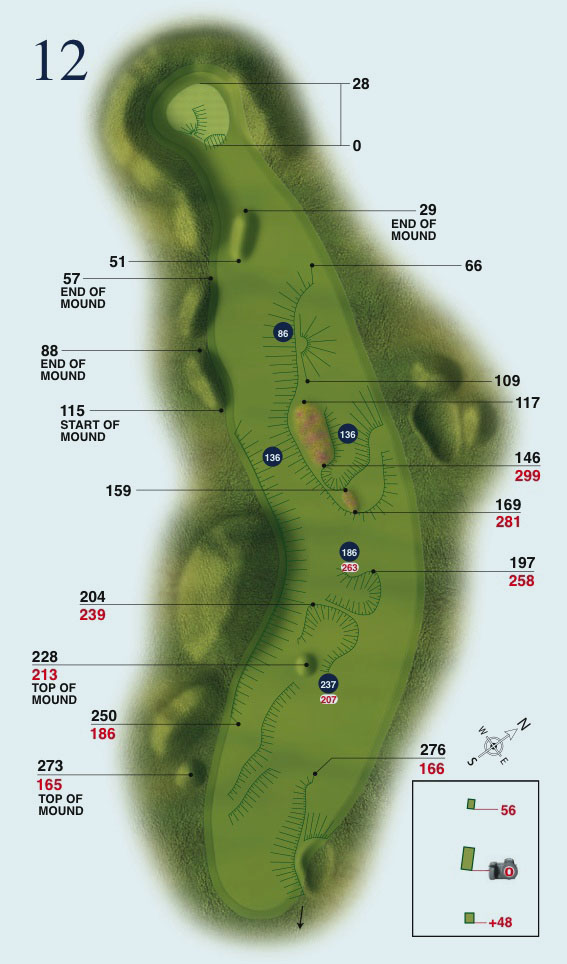 With good reason, this dogleg-left par-4 is rated the toughest hole on The Machrie. Invariably playing into the prevailing wind, reaching the green in two is a challenge for even the strongest player. Even a good drive leaves a long and difficult approach into the flattest putting surface on the course, although the contours to the left can help feed the ball back towards the pin. If in doubt though, short is better than long. 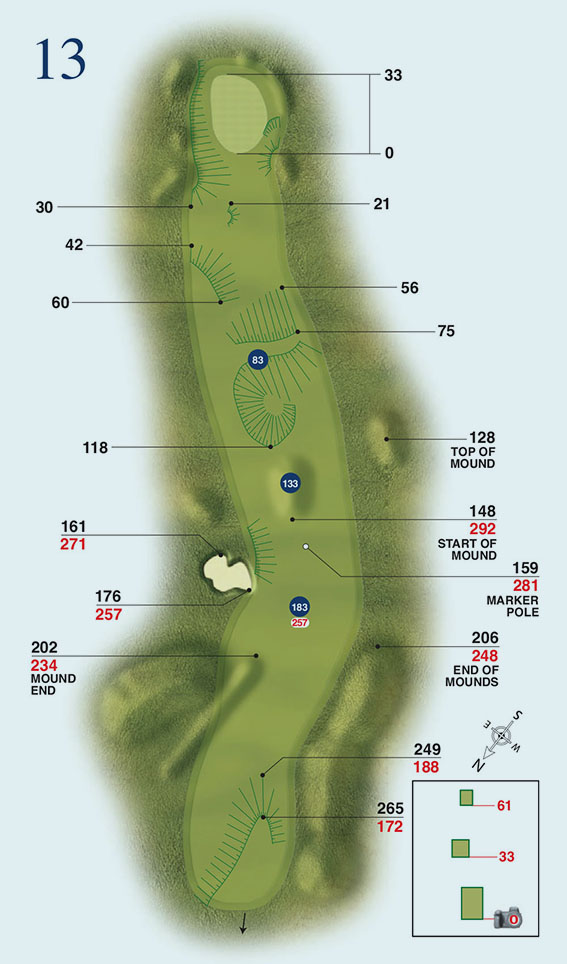 Sitting in the heather valley, this wonderfully framed short hole plays to a slightly raised green, which sits at a slight angle to the tee. Miss the green to the right and your short game will be severely tested. The sloping putting surface has a steep tier through its middle, making accurate distance control the key to making par. Anything less will likely leave an “interesting” putt, particularly from the higher half of the green. 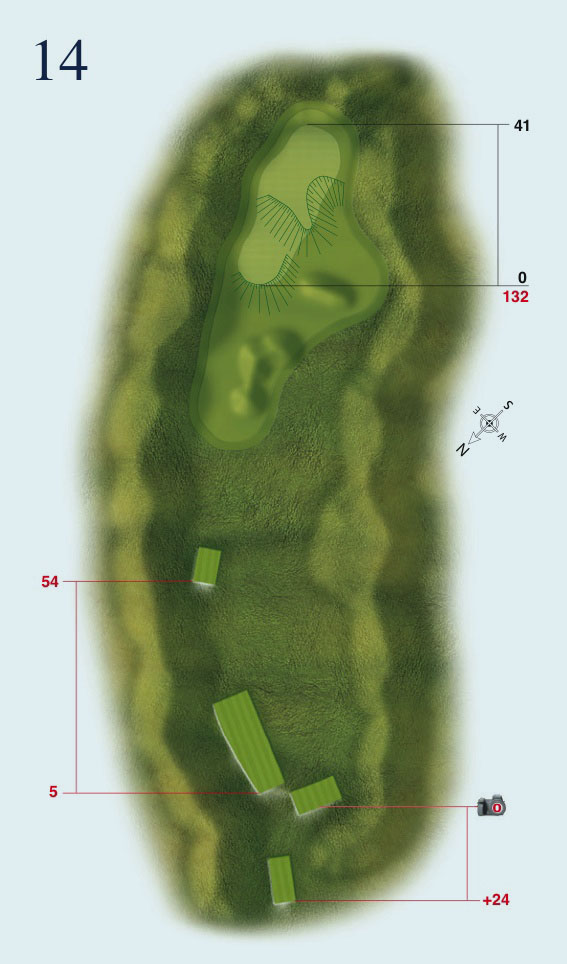 The drive over the dunes may be visually intimidating, but the steeply undulating fairway is wider than it first appears. Still, no matter how good the drive, the approach to the slightly raised green is always tricky. Swales to the left and a run-off to the right protect the putting surface. Miss the green and another stiff short game test ? albeit with lots of interesting options available – awaits. 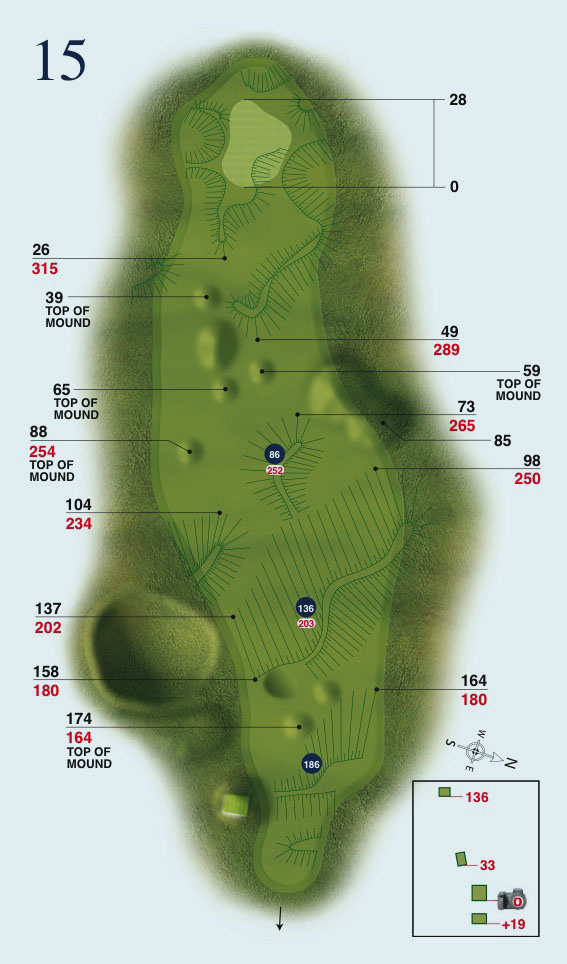 Only from the middle of the fairway will you have a view of the green on this tough par-4. Left or right of that ideal and the fascinatingly undulating putting surface will be “blind”. The green is protected by a deep swale to the left and a less exaggerated run-off on the right. The front third of the green is significantly lower than the back, which owns some wonderfully interesting contours sloping in all directions. 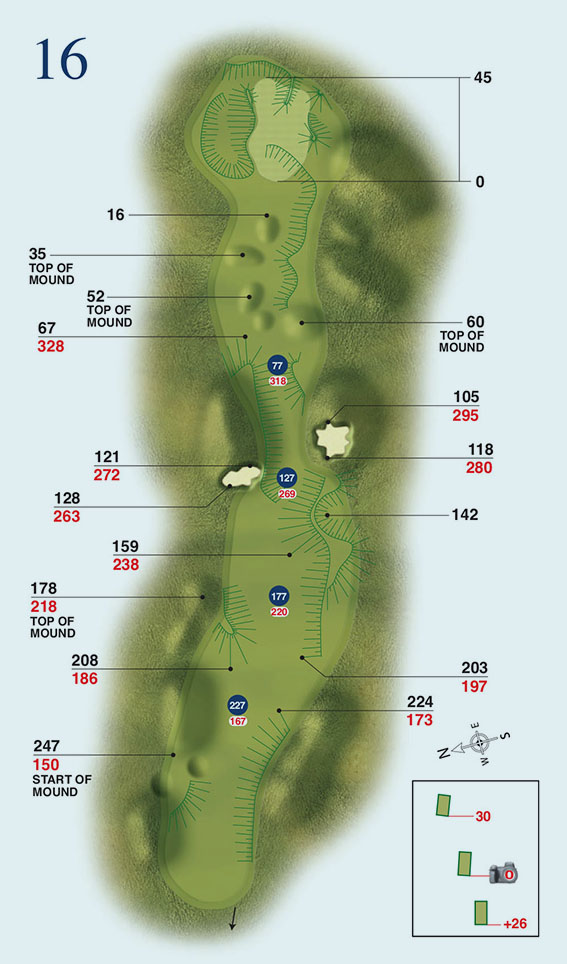 This short par-4 is fraught with danger. Aim to drive over the ridge line on the left-half of the fairway. From there you will have the best view of the green. Anything short of the ridge will leave a blind shot over the dunes, a dramatic throwback to The Machrie of old. The green has a subtle ridge through its middle and runs slightly from front-to-back. Only a well-struck approach has any chance of holding the green. 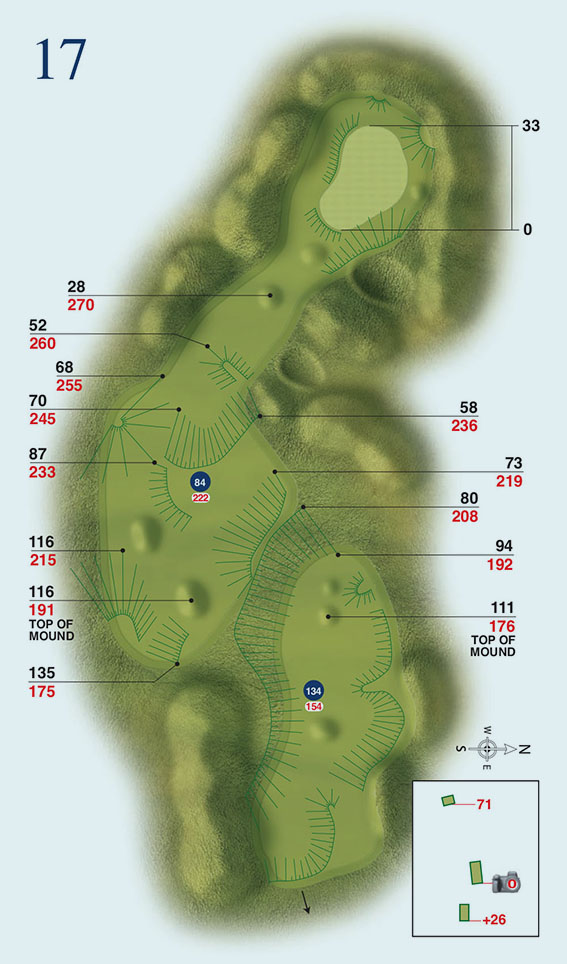 This demanding par-5, impressively framed by The Machrie Hotel, calls for an accurate drive to the narrowest fairway on the course. Although sometimes reachable in two for the longest hitters, this remains for most a strategic three-shot hole. The ideal lay-up must finish left-of-centre as the large green sits above the level of the fairway and at an angle. 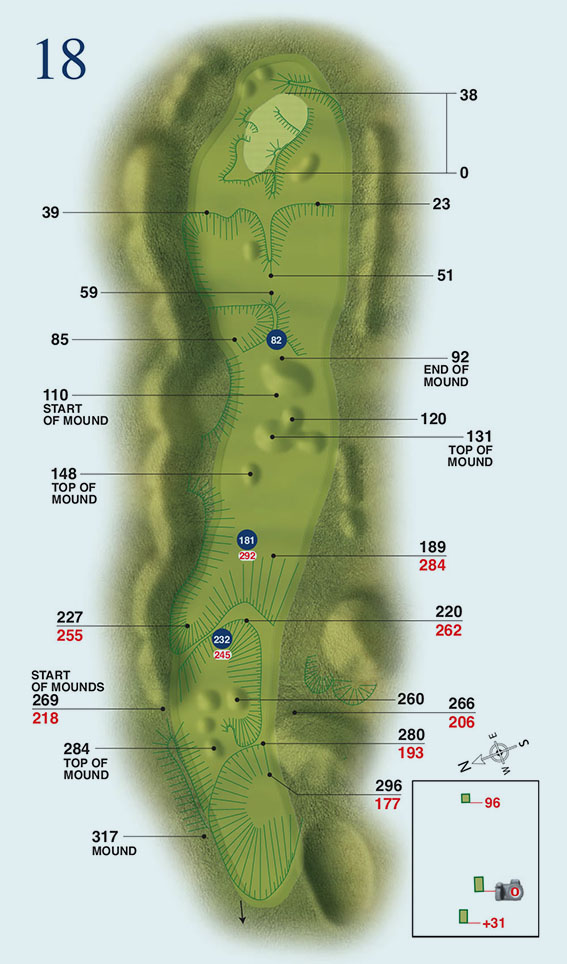