The Kildalton Cross stands high in the chapel grounds on the lands of Ardmore, to the east of the island. In the early days of the club, the Ramsays of Kildlaton commissioned a silver replica as a trophy for the premier competition of the Islay Golf Club. Many other trophies have been added over the years including the Higginbotham Trophy, but none to compare with the Cross. The original trophy remained with the club until May 1968 when it, and several other trophies, were stolen from the hotel, and although some were recovered the priceless Cross was never seen again. Fortunately, the Ramsay family retained an identical Cross and allowed the Soutter family, also long associated with the club, to copy and donate a further replica. This is the trophy which is now held, and held in equivalent esteem and competed for each year. 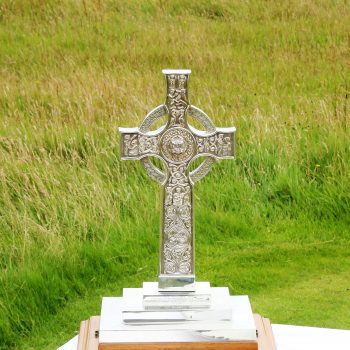